Like cows? Want to mingle with the top cattle vets in the country and chat with like-minded students from the other vet schools? Then check out the student day for BCVA Congress this year! All the information about booking onto the day is in the link below:

And the best part is, it’s open to all years whether you’re a fresher or a final year!

It was great to see so many keen students wanting to get involved with NFAVS today! We are delighted to announce that this year we hope to combine talks and practicals with Nottingham Agrics as well, so vets can chat to farmers about things that affect both industries.

If you didn’t get chance to sign up to VetSoc today get in touch via our facebook page (Nottingham Farm Animal Veterinary Society) or tweet us @NottsFAVS and we’ll get you signed up ASAP! (To become a member of NFAVS you have to have signed up and paid membership to VetSoc – £18 for 1 year or £70 for 5 years).

We think Daisy the cow attracted a few people too!

Keep your eyes and ears open for upcoming news and ticket information!

This year FAVS Congress was held at the Langford campus at Bristol University over 7th-9th February. Nottingham was represented by students over years 2 to final year; involved in a range of practicals.

The weekend was kicked off with a ‘meet and greet’ on the Friday night at the Langford bar, with the hard-core stuff beginning on the Saturday morning. Mornings consisted of various lectures ranging from calving to the correct use of drugs; whilst afternoons consisted of elective practicals ranging from pig PM to fertility sessions. In addition to the fantastic range of lectures, seminars and practicals; FAVS Congress was joined by a multitude of big farm vet practices from all over the country – Synergy Farm Vets, Lambert Leonard and May, Nantwich Farm Vets and many more, along with other trade stands including Dairy Co., myhealhthyherd and others.

“I thought the whole weekend was incredibly well organised and ran very smoothly. There was a good range of interesting practicals and having the seminars running alongside the practicals really allowed you to get stuck in. And of course the ceilidh did not disappoint!” Ellie Chiswell.

“FAVS 2014 was a great success. I personally felt that I developed my existing knowledge of farm vetting; at the same time having great fun. I attended the goat and camelid practical which is something that isn’t hugely covered on most courses. I look forward to next year being at Nottingham.” Amy Smith.

As per tradition, the famous ceilidh was held on the Saturday night following a mouth-watering 3 course meal. Students, vets and staff all participated, dancing with the superb band accompaniment; then danced the night away with the proceeding disco.

Congress was closed by FAVS Chairperson, Emily Gascoigne after the AGM, with the final announcement of where Congress would be held next year…. Nottingham!!

Congratulations go to BFAVS for organisation of such a wonderful weekend and hopefully Nottingham will be able to live up to the high expectations that follow.

This year BCVA are putting on a special student day at congress.

The day will include a series of case studies in the morning followed by and afternoon farm visit on one of three areas; Matitis, Fertility or Lameness.

As well as getting in touch with NFAVS members, why not visit the FAVS website where you can see what other farm enthusiasts from the other universities are getting up to!

From the group who brought you Cambridge and RVC Farm Animal Congresses, the FAVS website is now up and running at www.favs.org.uk !

The website it intended to unify the farm veterinary student societies across the British Isles and display what we’re getting up to both as a national body, and within individual Vet Schools.

The website will continue to expand with new competitions each week, so keep popping back to see what is new!

On Tuesday 3rd December, Sid Parker from Scarsdale veterinary practice came to give a talk. The talk was titled ‘Have I really examined that cow?’ and aimed to broaden our approach to the basic bovine clinical examination. We were reliably informed that this is a topic that Sid loves to quiz the 5th years on during rotations, possibly to their detriment!

There was a good turnout of 40 students, mainly 3rd to 5th years. The talk was kindly sponsored by Boehringer who provided mince pies & drinks.

The talk was very interactive, with a competition running between the two sides of the room, which naturally became very competitive. The talk ran with a series of pictures where we were encouraged to look at all aspects of a case, rather than becoming too focused upon the immediate presenting signs. This encouraged us to take into account aspects from the case environment, history & not to overlook the obvious such as pathomonic signs. It was an excellent session to review specific diseases previously taught, but Sid was able to give us more of an idea of how many cases he has seen in his career & therefore we could work out where to place it on our list of differentials. Sid also provided anecdotes to highlight his points, which always makes something more memorable!

Thanks Fay & Sid for giving up their evenings to come and speak to us and Boehringer for sponsorship.

Matt Yarnall from Boehringer came in on 28th November to talk to us about Milk Fever. Matt had previously worked in large animal practice before moving to Boehringer as a veterinary advisor for cattle products.

There was a good turnout of over 70 people, from across all years, especially those in 1st & 2nd year. Matt taught us about the pathogenesis, prevalence and treatment of milk fever in the UK. This was a really useful recap for clinical years, giving it is such an important disease while extended from the preclinical years teaching sessions. Matt made great use of the quizdoms which helped enforce all those vital facts and figures which he was speaking to us about.

The rest of the talk focused upon the fact that milk fever is a preventable disease & therefore the benefits of their bovikalc product. Bovikalc bolus, can prevent milk fever when given at the first sign of parturition & then again immediately after calving. Boehringer provided studies to back this up & more information can be found at http://www.bovikalc.co.uk/bovikalc.

The talk stimulated many questions from the audience with many people staying round to enjoy the hospitality of pizzas provided by Boehringer and ask Matt further questions. Thanks to Matt & Boehringer for providing this talk for NFAVS. 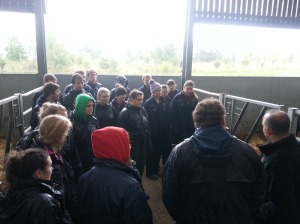 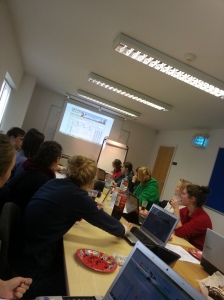 On Wednesday 16th October, 20 3rd and 4th year vet students took a trip to the Nottingham University Dairy Centre for a farm walk by Nigel Armstrong (farm manager) and Pete Orpin from Park Veterinary Group. The farm walk was then followed by an interactive session on laptops, using Pete’s website ‘myhealthyherd.co.uk’ to look at the university’s farm data.

The farm walk took the students through the cow calendar year, starting with the dry cow and finishing with youngstock. It involved Pete asking Nigel different questions about the management systems there are in place on the farm: mastitis, lameness, fertility, bedding/housing and care of the robotic milkers. This was to demonstrate how he extracts and engages farmers when he’s out on practice to obtain as much information about their farm as possible before planning a herd health plan with/for them.

After the walk, we went up to the conference room at the farm office to analyse the data from the farm. Pete briefly introduced his website before we all looked though the data. It is a website aimed at reducing unnecessary losses on dairy farms due to inappropriate management systems. It does this using statistical methods, by inputting the required data into the system, which then generates a bar chart to allow it to be visualised more easily. This highlights to farmers where their biggest losses are, e.g. mastitis management, fertility management or lameness management. By doing this, the vet and the farmer can work together to create a better management system that will boost profit and reduce losses (both livestock and money).

We had a very positive reaction from all the students who attended. The walk and following seminar was both engaging and interactive, allowing students to understand how farm vet work is changing towards a more hands-off managerial approach; helping to prevent problems from arising in the first place.

NFAVS are thankful for the opportunity given to us by Nigel Armstrong and Pete Orpin to run the farm walk and seminar.

On Thursday 3rd October Lysan Eppink came to Nottingham Vet School to give students in all years a brief introduction to the British Cattle Veterinary Association, alongside an introduction to Bovine Viral diarrhea (BVD). There was a great turnout with over 100 students who attended the talk!

Lysan Began talking about what BCVA is, who works for them and how it can benefit vets becoming a member both as students and in practice. She described how her role is a veterinary adviser and whilst keeping vets informed on the latest news in cattle practice, she is also involved in managing the team and working alongside government bodies on a range of matters.

To become a student E-member of the BCVA it costs £5 with the benefits of; online access to cattle practice , clinical research grants (up to £1000) and reduced rates for the annual BCVA congress. BCVA kindly provided us with many copies of Cattle Practice, free pens and information sheets on student E-membership, all of which went down well with those who attended.

The second part of the talk was based on BVD with a brief explanation of what causes the disease, epidemiology of the disease, signs and symptoms , treatment and finally prevention for the future. The talk was engaging throughout and students were very interested in knowing more after the talk was over with many challenging questions posed about how BVD is being tackled in the UK. Feedback from student who attended was positive with everyone feeling well informed on the BCVA. Students we able to further their knowledge about BVD or get a first idea of BVD for those in the lower years.

NFAVS are very grateful that Lysan Eppink could come to the vet school and that BCVA have offered great support to veterinary students with the availability of the E-membership.